What Are Self Defense Weapons?

Any object can be used as a weapon, either offensively or defensively.

Many everyday objects can be used to fend off someone attacking you in your home.

Carrying an everyday object in public, to be used as a weapon for self defense, needs some caution however.

Get caught carrying a hammer without good cause for example, and you may find yourself accused of carrying an offensive weapon.

Umbrellas
on the other hand, also make good improvised self defense weapons and
would be harder to suggest that you had one for any illegal purpose.

A bunch of house keys, a pen or a comb can also be put to good use in defending yourself.

A
good forceful prod to the groin with a rolled newspaper will cause any attacker to pause long
enough for you to retreat to safety.

Should You Carry Self Protection?

Are you justified in carrying self defense weapons? Aside from any legal
implications, is it sensible to arm yourself in case you are attacked?

Using weapons of any kind to defend yourself, should be a last resort. If at all possible, keep your self safe by avoiding situations and places that could put you in danger. 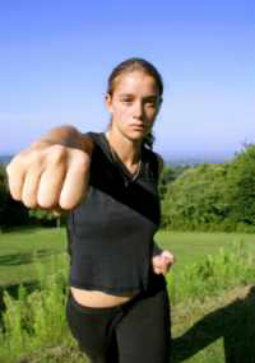 Of course, in the real word you cannot guarantee that any place is
safe, or that any person, or group of people, no matter how nice they
may seem, will not attack you.

However, by being careful, as far
as possible, about the places you go and the people that you come into
contact with, you have the best chance of staying safe.

If you do find your self in a threatening situation, then your first choice should be to quickly get yourself away from that situation if you can safely do so.

Very
often a confrontation will start with a verbal assault before becoming
a physical attack.

All the time that the encounter remains in the
verbal stage, there is a possibility that Verbal Self Defense can be employed to prevent physical violence.

The burden is on you to be absolutely sure that carrying or using a
particular weapon for self defense, is legal where you are – whether
you live there or are visiting.

Don’t forget that although a state
may permit self defense weapons, a city or town within that state may
have legislation banning them.

Don’t Be A Victim Of Your Own Self Defense Weapons.

Never forget that any self defense devices or weapons that you carry can be used against you.

It’s a fact that many victims of assault have been injured, even killed, by their own weapons or self defense devices.

It
is important to get trained in how to properly use almost anything.
When it comes to using something to defend yourself with, training is
very important.

Don’t be a casualty of your own weapon.

Before
carrying pepper spray for protection it is advisable to check whether
or not it is legal for you to do so.

As with stun guns, some places have
laws restricting the use, or possession of such sprays. See Using Pepper Spray.

Stun
guns and Tasers® are excellent devices for self protection when used
responsibly and with justification.

The best use of these devices is to give yourself time to get out of danger and alert the police.

Any
use of electronic control devices must comply with federal and local
law. Remember that it is the responsibility of the buyer and not the
supplier to check out and conform to local laws regarding the purchase
of such self defense weapons.

Child Tracker Device.
A child tracking device can do so much more than alert you when your child has moved away from you.