Should you hide your cameras?

Neither
cameras that are in full view, or surveillance cameras that are hidden out of sight, can
prevent someone burglarizing your home or committing some other crime
against you.

What they can do is record evidence of the crime being committed and who committed it.

Plus security cameras that are not hidden have an extra benefit. They are a visual deterrent.

A camera that can be seen says, I’m watching you and I’m recording what you are doing.

Surveillance
cameras that can be seen deter many would-be burglars. After all, why
risk breaking in to a property that obviously has CCTV surveillance,
when there are many properties to burgle that don’t have security
cameras?

Likewise if there is some jerk who enjoys vandalizing
your front lawn, is he going to want to do that if he can see a security
camera pointing at him?

Most burglaries are committed by opportunist thieves, they see security cameras and they move on.

The
more professional thief may do the same, or he may know enough to skirt
around the camera’s field of vision, or cover his face and put the
camera out of action.

However, in most cases visible security is an effective deterrent.
That is something to keep in mind when deciding whether or not to use
concealed cameras.

On the other hand . . . hidden cameras can’t be vandalized, or put out of action, unless they are discovered.

It
may be that for surveillance of the outside of your home, a combination
of visible and hidden surveillance cameras is the best option. 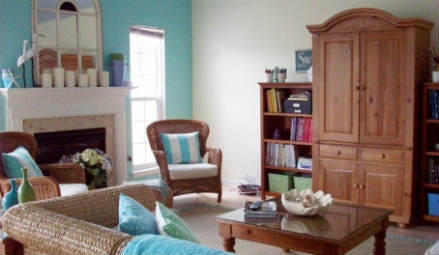 Does this room contain any home surveillance cameras? Impossible to tell if the cameras are well hidden.

Other Uses For Hidden Surveillance Cameras.

Many
folks when leaving their children in the charge of a nanny or a
babysitter, make use of a concealed camera to record what happens.

The
resulting recordings either alert the parents to mistreatment, or
reassure them that their children are being treated properly.

Pet owners also use hidden cameras to check on pet sitters. Again
folks having work done in the house may use a concealed surveillance
camera to check up on building contractors.

Hidden surveillance cameras used in this way have become to be known as Nanny Cameras.

Without
getting into the rights and wrongs of spousal distrust, it is a fact of
life that covert equipment is used in this way.

Want to know
what your teenage children are up to when they are left by themselves?
That’s another application for hidden surveillance.

Hidden Surveillance Cameras Inside And Outside.

It is hoped of course, that your home security measures will deter or prevent anyone from breaking into your home.

You may prefer to have security cameras both inside and outside
your home. In this way you can record both the break in itself and the
actions of the burglars if they do manage to get inside.

You may
particularly want to hide the cameras that you install inside your home.
One reason that you may want to do this is that you may not think
security equipment to be aesthetically pleasing.

Security cameras
these days can be very compact, even miniature. Dome cameras suspended
from a ceiling can be discrete, but still you may prefer to keep such
things out of sight.

Where Can You Hide Security Cameras?

Modern
technology has helped make surveillance cameras very compact, this
opens up quite a variety of opportunities to hide them both inside and
outside your home.

When deciding on a place to conceal your camera keep in mind the area you wish to keep under surveillance.

It is not much use picking a secret place that somebody is not likely to think a camera could be secreted, if it doesn’t give the viewpoint you need. It is not very helpful to capture a video image of the top of a burglar’s head for example.

Outside the home you can hide your cameras in pretty much the same
places as you would fix a visible camera, except of course the camera
would be covered up or disguised in some way.

A bird house can be a good
spot, so too can garden ornaments, many of these are hollow. A camera
concealed inside a shed, or garage, could be trained on the back of your
house.

Wherever you use hidden security cameras outside your home make sure they are weatherproof.

Inside your home, places to conceal surveillance equipment are close to endless.

Stereo speakers and other items of entertainment
equipment can be adapted to hide cameras, as can hollowed out books,
plant pots, air purifiers, drink cans, children’s toys, nightstands,
chests, closets and cabinets.

You can also buy everyday items with hidden surveillance cameras already fixed inside. Most of these items are fully functioning.

Keep
in mind that if you use objects that can be moved in which to ensconce a
camera, such as a teddy bear or a drink can, then Murphy’s law says
the object will be moved.

It may not necessarily be moved with the
intention of thwarting your surveillance, but if it is moved you will not
capture the area you want.

Is It Legal To Install Hidden Security Cameras?

The answer to that question varies from country to country, state to state.

In territories where there are restrictions on the installation of,
or use of, covert surveillance equipment, these restrictions usually
apply to areas where persons have the right to expect privacy.

Bathrooms,
dressing rooms and bedrooms are the kind of places where it is
reasonable to expect privacy.

A nanny or babysitter in your employ
would have the right to privacy in such areas, even if you do suspect
they may not be taking care of your children properly. Whether a burglar
would have any right to expect privacy is best answered by your lawyer.

It
is best to seek advice from a local lawyer before installing any covert
surveillance equipment, to be sure about restrictions, if any, on the
use of such equipment.

Of course, any footage you obtain from
your hidden surveillance cameras should only be used legitimately.
Getting the conviction of someone who has committed a crime against you
is a very good legitimate use.