Does a door chain afford you much protection?

I
can still remember the novelty of living in a house rather than an
apartment.

When I was in the house alone, which I frequently was, I
could crank up the volume on the TV set as loud as I liked with no
worries at all.

Grandma had volunteered to take me in while my parents solved a
problem they had with accommodation and so I moved in with my mother’s
mother and my uncle and aunt.

My sister was little more than a babe in
arms and would have been burdensome for grandma so the invitation was
not extended to her.

Having me around did not impact on the old
lady’s routine too much however, except perhaps on school days when she
had to drive me there and pick me up at the end of the day.

On
days with no school I was simply left in the house when all the grown
ups were out, that’s how it was back then, not too much was thought
about it. Grandma did have her thoughts on the security of a child left
‘home alone’ though. Her solitary instruction was to always keep the
chain on the front door.

That front door was massive, or so it
seemed to me, a massive door on a massive house.

The chain was one of
those security door chains that are attached at one end to the door frame
and the other end slots into a plate screwed to the door.

With the door chain in place you can open the door just enough to
talk with whoever is there but the chain would prevent a person of ill
intent from forcing their way in. Or so the theory went.

Aunt
Lucy, my mother’s sister, and Uncle Alfred, her husband, were out at
work for most of the day. Grandma did not work but did not like to spend
her days in that house, most days she would make a trip up town.

Going
up town could be a shopping expedition and sometimes she would take me
along for the company. Most times though she went to call on one of her
friends and I was not asked if I wanted to accompany her. On those days
grandma never failed to leave without giving me the instruction to
“Leave the door chain on.” I did too.

As soon as the old lady had
closed the door behind her I lifted up that thick and solid door
security chain and inserted the free end into the slot.

And so
that big old house became my kingdom for the day, I was free to roam all
over it, and the large overgrown garden out back, safe and securely
protected by that old door chain.

The Door Chain Did Not Stop Him.

There were not too many
callers, the odd door-to-door salesman and the like but that was about
it.

That chain never came off though, I was not the world’s most
obedient kid but I did heed my grandmother’s words. All went well until
the day Uncle Alfred came home early.

It was a comic book that
had my undivided attention. I was sitting at the very far end of the
garden completely lost in the world of speech bubbles and cartoon
characters. Crack! I did not know what that sound was except that in came from within the house.

Should
I go and investigate? Should I see if I could somehow get the attention
of one of the neighbors?

A loud c-r-a-c-k like that must have been made
by someone but for someone to be in the house they would have to have
come through the front door and that big old front door was locked and
had that big old security chain on didn’t it? 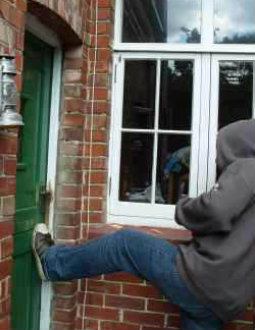 I must have made the perfect garden ornament. I stood motionless for
what seemed an age when eventually I could see someone moving about in
the kitchen. It was Uncle Alfred.

Uncle Alfred was not a man noted
for smiling, he was not smiling as he recounted how, having unlocked
the door found his way to be barred by the door’s security chain.

The
man claimed he had banged a beat out on the doorknocker and hollered, if
he did I heard neither but I heard that crack all right.

The
crack was the sound of the screws ripping out of the door frame as my
uncle applied his shoulder to the door. Not a man to put too much
thought to how he may solve his problem, such as walking round the back
and trying the kitchen door, he simply busted his way in and the
security door chain, as thick and solid as it was, did nothing to stop
him.

Of course according to Uncle Alfred I was a stupid brat for
engaging the door chain and preventing him from gaining entry.

But
Grandma would have none of that, I was commended for following her
instructions and uncle was made to fix up the chain.

Not Much Security At All.

I don’t know but I imagine that Uncle Alfred used the same short
screws to re-affix the chain to the frame that he had so easily busted
out.

I do know that that door chain continued to be the security for
that door even though Uncle Alfred demonstrated that it was, in fact,
not much security at all.

A door chain is
better than just opening up the door to every knock of course but why
open the door to a stranger that you don’t know the intention of anyway?
A better security measure would be a peephole door viewer then you can know who is calling.

Home invaders
often call at a door on some pretext and then barge their way in. A
door chain is unlikely to prevent that, ask Uncle Alfred. Be sure of who
is at your door and if you are not, don’t open it.

After a burglary it is possible you will receive the attention of a burglar again, probably the same burglar!

You see burglars figure that you will likely replace the items that they have stolen and they would like the replacements too. They already know the layout of your home, know the times that you are likely to be out of your home and know the . . .
After a Burglary.