Twenty two years ago I was living with a girl in a rented apartment. All the apartment doors in the block had latch locks, as did the entrance door, the kind that can be popped open with a credit card.

There was only six apartments in the block so the place was mostly empty at daytimes and that was when the burglary happened. I always arrived home half hour to forty minutes before my girlfriend, as I did that day. Nothing unusual at the entrance door, locked so I opened it with the key, but the apartment door had been busted in.

I know now that I should not have walked right in, the burglar may have still been inside, but I did not know that then. Not that we had much of anything between the two of us but I franticly looked around to see what had been taken. One draw had been left open and it was obvious that the burglar had rummaged through it. My mind was not clear so I did not really know but I couldn’t find anything missing. Then my girlfriend arrived, naturally she was shaken by the news.

Eventually we were certain that the only things stolen were seven record albums (three that I wish I had now and the rest you would have paid someone to steal.)

No one saw or heard anything of course, there was only one renter who was at home for part of the day. The landlord was a real peach! He practically accused me of busting up the door myself and wanted to know why the entrance door was not damaged, I couldn’t answer that. It was odd though, also odd was that our apartment was one flight up. Why didn’t they break in a ground floor apartment and why only take a handful of records, my girlfriends spare wrist watch was left.

The landlord point blank refused to fit better locks or let us fit our own, because he needed emergency access. My girlfriend was really affected by the burglary, as I was, but she became so obsessed with moving out to a safer building which we simply could not afford to do, that the relationship disintegrated.

I now have a small house, of which I am extremely proud. And yes, I do pay a lot of attention to security. So perhaps that little burglary was a lesson, you can’t be too careful, you have to do all you can to protect your home. 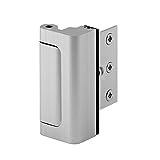