How does window security film work?

Does it really stop someone, or something, breaking the glass?

No,
the film is a clear flexible polyester sheet that is affixed to the
inside of the window.

If someone outside, a would be intruder or a
vandal, hits the window hard enough or if the window is struck by a
stray golf ball for instance, the glass will shatter. . . but stay together.

With an unprotected window a thief could break the glass to gain
entry into your home.

With window security film fitted he could break
the glass but still not be able to get in.

The shattered glass would
still be in front of him, keeping him out of your home – the shards of glass held in place by the film.

So does that mean that a burglar can’t make a hole in a window protected with security film?

Protective window film is not absolutely intruder proof,
what is?

With repeated heavy blows with a hammer or crowbar a
housebreaker could make a small hole in your film-protected window, then
reach in and slip the catch. But that would involve two things, noise and time.

Burglars hate noise; it is apt to attract the attention of neighbors and passers by. 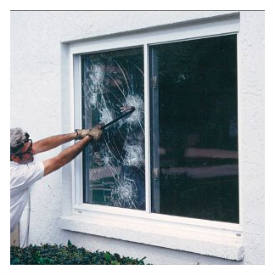 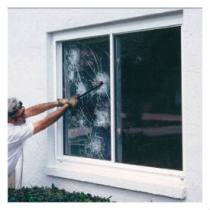 Time is also a burglar’s enemy; the more time they spend on a break-in the more chance they have of being caught.

Very
few housebreakers would risk the time needed to successfully attack the
glass.

Once they realize they are up against security film they would
likely move on and find a home that is less protected.

A
determined burglar though, or perhaps a novice who doesn’t know what he
is up against, may succeed in getting through your window.

This is why
security film is best as just part of an overall security system.

So would I still need a home alarm system if I installed window security film?

Every homeowner’s security needs are different, you have to decide the level and type of protection that your home requires.

No
form of defense against intrusion is perfect in isolation whether that
be alarms, quality locks, protective security film or even surveillance
cameras.

Protective film can help prevent a burglar getting in your
windows but you still need secure locks and fittings on your doors.
Likewise, an Alarm System can alert your neighbors or the police but would not stop a thief getting in your window.

Does protective film take the place of window security bars?

Security film is an alternative to Window Security Bars. Bars, grilles or shutters are all highly visible methods of protecting windows.

The thief can see the bars, which in many cases will deter him from even trying to enter your home through your windows.

Window security film is in most cases virtually invisible, the
housebreaker won’t know it is there until he has taken a swipe at the
glass – a hard enough swipe will break the glass but the thief still
can’t get in.

Should I fit protective security film to all my windows?

You certainly may want to fit window security film to all your windows that are particularly vulnerable such as those not
overlooked by neighbors or passers-by.

If you would want to fit burglar
bars to the window then you could fit window film as a more attractive
alternative.

No home security measure can be truly regarded as expensive as it may
save you the expense of a break-in, but protective film, like
everything, does have a cost. You may not wish to cover upper story
windows unless those windows can be easily reached without a ladder.

Security film is usually sold by the yard or meter, it is supplied from a roll
and is available in various widths and thickness.

Some varieties not
only provide protection against burglary, storm damage etc. but also
block solar heat.

You should be aware though, that not all window film is protective window film.
Some film may insulate against heat but be of no use for security, be
sure that the film you chose is intended to withstand force.

Attaching to the frame as well as the glass increases the
effectiveness of the film to withstand attack. Several window security
film manufacturers offer framing support components to fasten the film
to your window frame.