The
question came from a nephew of mine, who never calls me uncle Bob. The
question, coming out of the blue as it did, caught me unawares. I
replied along the lines of he is a man that gets into peoples homes and
steals their things.

I looked at him dumbfounded. Hadn’t I just answered that?

Admittedly it was not a very detailed answer, he was only ten years
old at the time, and I did not want to fill his head with too many facts
about burglars, some of which may be a little disturbing to a young
kid.

Had he not understood? I thought that he must have done, my
explanation was pretty straightforward, even for a ten year old to
grasp.

I had the fleeting thought that he must be going deaf, and at such a young age, but then it dawned on me. 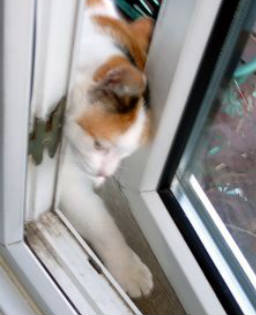 He was asking what the difference was between your common everyday burglar and a burglar that creeps in like a cat.

Before saying more, I had to allow myself a little time to think.
What exactly does this expression mean?

Does anyone still use the
expression these days?

I remembered then a fairly recent news headline,
along the lines of “Cat Burglars Make Off With Gems Haul.” The story was
about a pair of thieves who got in the second story window of a home by
a bit of skillful climbing.

That brought to mind another expression for that kind of burglar, a second story man.

Recalling
that news story helped me to put together some sort of an answer to my
nephew’s question. I explained that we sometimes call a burglar who
enters a home without noise, perhaps stealthily climbing through an
upper story window, a cat burglar. We call them this because they
operate like a cat, quietly creeping in and out avoiding confrontation
of any kind.

I contrasted this method of burglary with that most often used by the
opportunity burglar, using brute force to break open a door. I did not
compare it to home invasion, again remembering that the boy was only ten years old.

In addition to my brief explanation, I told him the best way to avoid
being cat burgled was to not leave any windows unlocked when you leave
the house, second story or not.

The blank, and somewhat far away, look
on the boy’s face alerted me that I’d perhaps drifted into overkill. So I
left it there, saving my long list of home security advice for another
time.

My nephew said nothing. So I asked the question that perhaps I should have asked earlier.

“Why did you want to know what a cat burglar is?”

I
was more than half expecting to hear that he thought the expression
referred to someone who stole cats. But I did not get any other answer
but the kind that you often get from a ten year old, a sullen look and a
shrug.

Although it is probably not possible to make your home completely
impenetrable, if you attend to all the items on this security list your
home will be far less likely to be burgled. . . Home Security Checklist.

Next post: After a Burglary : Reassess your security protection.