“The scam is usually referred to as the White Van Scam because a
white van is the vehicle the tricksters usually use because these vans
are the cheapest to rent.”

You have just got out of your car in the bank parking lot and about to
walk into the bank. A guy jumps out of a white van and approaches you
enthusiastically.

He ask you if you like music, who doesn’t?

He tells you that he and
his buddy, who is sitting behind the wheel of the van, install audio
speakers, they’ve finished all their jobs for the day and guess what?
They have a pair of speakers left over.

Now these babies are your high end products; these normally
retail at $1100 a pair.

They don’t want to take them back to the office
they say, would you be interested in a very good deal?

They pull out a
magazine that carries an advert for the very same pair of speakers and
sure enough they retail for what they said they do.

They use a few technical sounding terms to describe the
performance of the product, they ask you if you agree that impudence
wound sub woofers make for the best power output? You have no idea what
they are talking about but you grunt an agreement anyway.

They tell you they don’t want to spend too much time on this,
$500 and the top of the range goods are yours for less than half retail.

You stall a bit, they drop the price to $400 and tell you firmly that
you don’t want to pass up on this deal, at the same time taking two
cartons out of the white van and placing them by your car. But, you
protest, you don’t have the cash.

That’s alright, nice guys these,
they’ll come into the bank with you and you can make a withdrawal. 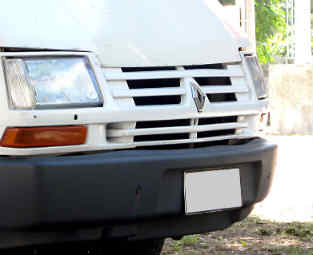 In the end you are watching the van pull away with your money and you
are left with what you believe to be top quality speakers.

The truth is
you have a pair of low, low quality speakers and you’ve been caught
out by the white van scam.

The white van scam is often operated in parking lots, bank
parking lots are favorite for obvious reasons, but also many other
places. The speakermen, as these chiselers are called, will often
just drive and when they see a likely looking mark in his vehicle,
honk, shout, do anything to get the mark to pull over.

A few years back I was walking my dog when a van pulled to a halt
beside me. Unusually there was only the one scam artist, a guy with a
mile wide smile, wearing a t shirt with an audio company logo. He wound
down his window and started in on his story.

Lucky for me I’d read more
than a few reports about the white van scam and cut him short. He didn’t
try to pressure me any further, my dog may have had something to do
with that, he just popped the shift into gear and went on his way to look
for another mark.

Not Only White Vans.

The scam is usually referred to as the White Van Scam or the
White Van Speaker Scam because a white colored van is the vehicle the
tricksters usually use because white vans are the cheapest to rent.

Fact is the speaker swindle can be, and is, carried out using almost any
type of vehicle. Blue vans, red vans, vans of any color, trucks, SUVs,
pick ups, it’s just that it is more convincing if a van is used,
especially one with an apparently bona fide company name on the side.

Oftentimes a magnetic, or a plastic stick on sign, will be used but
speaker tricksters have been known to have a van sign-written all in the
cause of looking just like the real deal.

The ‘speakermen’ are only the chiselers at the sharp end of the
scam. There will be a big fish that imports shipments of phony speakers.
He will find a warehouse to rent and recruit teams of speakermen.

The
area will get worked until the white van scam receives local publicity,
then with the public aware, the scam does not work so well, so the whole
operation decamps for virgin territory.

This con trick is nothing new, it has been operating for some
years now. It’s worldwide too, it has been used in Europe, Australia,
Canada, United Kingdom as well as the United States of America.

Not Only a Speaker Scam.

Of course it is not only worthless speakers that get shifted in
this way. How would you like a state of the art $900 DVD player? The
nice man in the van has one for you for $350 cash. What, you don’t have
$350? Ok, for you $250, that’s rock bottom, look at the specifications,
you drove such a hard bargain, we are mugs for letting them go at such a
low price.

Scam artist don’t need a vehicle for smaller items. Junk watches
have been sold by variations of this scam since forever.

I’ve not heard of the white van scam being operated door-to-door
to unload speakers, but very similar scams are used for many types of
goods, home entertainment systems, digital photography equipment,
carpets, garments, all kinds of furniture.

The pitches are all targeted towards human greed. They
claim to be carpet layers just finished fitting out a nightclub and got a
whole roll left over, nice neutral color, let you have it for a song.
They are delivery drivers and there was an inventory error. The
warehouse loaded up one too many.

The scammers will produce invoices and
documents to prove how much of a deal they are offering you, they’ve
business cards to ‘prove’ who they are.

The brand names used on the fake goods are often deliberately similar to reputable brands.

As in all confidence tricks it is the greed of the unsuspecting ‘mark’ that is key to making it work.

The fraudsters does not invite you to buy a pair of cheap
speakers. You would reason, quite rightly, that cheap speakers would be
of poor quality and would not be a smart purchase.

What the white van scam artist does do is present you with the
story that the fool at the depot loaded 12 sets of speakers, but only
invoiced for ten. If he, the hard working installer, returns them to
the depot then someone else will benefit from the mistake.

So here he is
offering you the opportunity, because you are just the kind of guy to
appreciate such things, to own superb high end speakers for a fraction
of their retail value.

You, being human, don’t stop to consider that this guy does not have the
right to sell the speakers, no matter if somebody did make a mistake.
What has got your attention is that you can be the proud owner of
goodies worth $1000 just by parting with $300, and won’t that make you
feel smart.

Likely audio speakers were not on your mental shopping list. Likely
that you are okay with the ones that you have. But a deal such as this
you don’t want to pass up.

After all, these are high quality goods,
look at the brochure the guy is showing you, and the brand ‘DiVinci’,
you’ve seen that advertised haven’t you, isn’t that a brand that the
audio freaks rave about?

You may think to yourself that even if you don’t use these luxury
speakers yourself, you can always sell them on at a fat profit. The
scammer may even subtly put this thought into your mind.

To the eye of the layman the speakers look the part. The thing is
that speakers are meant to be listened to, not gazed at, when you hook
these pieces of junk up to your audio system is when that penny drops.
The sound is atrocious, oh man you know you’ve been had.

The pair of speakers may appear to be alright, and they do
function, sort of, but you would not want to listen to them for more
than thirty seconds. The shell is cheap fiberboard covered in a thin
laminate, the components inside are minimal and of low, low quality.

But
at least you got speakers of a sort, some don’t. The white van speaker
scam sometimes carries another surprise, nothing in the cartons but
bricks.

Child Location Device.
It’s a heart stopping moment but your child locator device can locate your wandering toddler in an instant.

Next post: Alarm Batteries : Back up power for your alarm system.