Don’t Get Caught In A Staged Accident Scam.

You are perhaps driving a little too close to the car in front, but
you are not stupidly close and the traffic is not moving that fast, any
slower and it would be a crawl.

It’s been a long hard day and your mind is on getting home and
getting some food inside you, you are driving on mental autopilot.

Suddenly and with no warning a vehicle cuts in front of the car in front of you, that car brakes . . .

Cruuump! You have just rear ended.

You are not hurt, you were not going any speed. But drat, your
clean driving record has gone. You pride yourself on your careful
considerate driving and you are kicking yourself for not leaving just a
little more room.

Don’t feel too bad about your driving, you have unknowingly been caught in a staged accident scam.

You get out of your car, so does the other driver. You fear he is
going to be an angry bunny as you have driven into his vehicle.

You ask him if he is hurt at all, he amiably replies that he is
okay and his wife, who is a passenger is also okay, it was only a bump.
He says he is sorry for braking suddenly but could do nothing else as
the other car cut him off.

Hey! he is not Mr Angry after all but seems
to be Mr Nice Guy.

The third vehicle of course is not around, it has long
disappeared. Neither of you got its license plate. If you haven’t
realized it yet, that third vehicle is part of the auto accident scam.

You note that Mr Nice Guy’s car is not exactly showroom fresh
and has likely been driven enough miles to get around the globe several
times. There is not much damage to either vehicle. 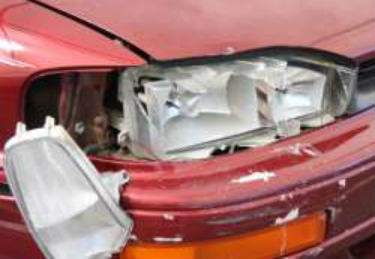 The staged accident scam might go one of several ways here.

Mr Nice Guy may suggest that as damage to his car is minimal, you
might want to give him the cash to get the small dent fixed and that
will end the matter. He sympathizes with the situation but you did drive
into him after all.

If you don’t have the cash with you or you don’t like that idea, he makes another suggestion.

He ask you if you really want to bother the insurance companies.
If a claim goes in you will end up paying plenty in increased rates. You reflect that is true, that small bump is going to cost you one way or the other.

Mr Nice Guy says he has a good buddy in the auto accident repair
business and can get his damage fixed dirt cheap. This sounds good to
you. So the guy asks for proof of your ID, makes a note of your license
plate, and tells you he will send you the bill probably in just a couple
of days.

Staged Accident : things may not be all they seem.

The damage to not so nice guy’s vehicle is considerable you are told.
How could this be, you’ve seen the damage and it was just a small dent!
And then, the attorney informs you that there are injury claims from
the driver and his three passengers.

What? There were no injuries from that small accident and
there was only the driver and his wife in the car, where did the other
two passengers come from?

The staged accident fraudsters are really going to town on this
one.

You see Mr Nice Guy really does have a buddy in the accident repair
business, a buddy that is prepared to way overstate the damage for a
cut from the staged traffic accident scam.

The injuries that the phony victims claim they received will
likely be ones that are hard to disprove like neck and back strain.
Then again, the insurance fraudsters could have dishonest doctors on
their team. And that attorney . . . who knows?

The auto accident insurance scam is not always staged for a rear
end collision. You could be passing through a crossroad when a vehicle
shoots out and rams you.

Witnesses appear from nowhere and swear that you jumped a red light.

What can you do? Be mindful that things may not be all they seem.

If you are involved in a collision be aware that it could be a staged accident, call the police.

Get the names, addresses and phone numbers of all concerned parties.

File an accident claim with your insurance provider, do not settle a claim privately.

Insurance companies are nowadays acutely aware that staged
accident scam rings exist. They are taking steps to combat them and the
FBI has been successful in bringing these fraudsters to book.

You can’t do better than leaving plenty of room between your vehicle and the one in front, you just never know . . .

Car Theft : Don’t be a victim of car thieves.
Think about the cost of car theft to you. Your recovered vehicle may be
returned to you in a sorry state. It may have been vandalized or had
the guts driven out of it.