Who Has a Copied Key?

Could someone have a copied key to your new home?

It
is a great feeling moving in to a new home and no less so when that new
home isn’t newly built.

Mostly when we say a new home we mean the home
is new to our family.

When
we move in to a previously occupied home it means that we have an
urgent job to do, a job that we cannot afford to leave until later. 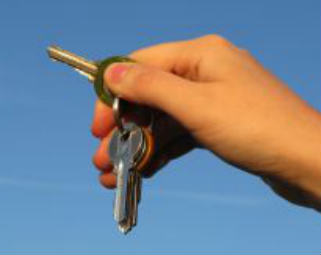 If another family have owned, or rented, your home before you, this
means that they must have had keys to your home, keys that almost
certainly were loaned out to someone at some time or other.

Perhaps
the family needed their washing machine repaired but the only time
that the repair man had available to call was when there was no one at
home to let him in.

So the family loaned him a copy of the key to the
front door so that he could call, make the repair and return the key.

Most repair men are, like most people, as honest as the day is
long.

But there are villains in all walks of life, all it takes is for a
copy of the key to be made, quick and easy.

Then at a later date
when the washing machine repair, and the loaning of the key, is
forgotten about, the villain returns.

He doesn’t have to go to the
trouble of breaking in, he just ensures that there is no one at home and
lets himself in.

The bad guy that has a copied key made may not be the one who does
the stealing, he may sell that key on to a professional thief.

But
in the meantime, the folks that lent the key have moved out and you
have moved in, and there is a copied key to your home out there in the
hands of the bad guys.

No doubt of it, changing the locks is a top priority when you move into a new home.

Think
of this, the family that sold you your new home seemed a really nice
family, cute young kids and all. And in all probability they were all
that they seemed to be. But supposing this is not the case, suppose that
maybe one member of that family was not so honest.

Can you be sure they
handed over all copies of all the keys?

Be aware that it is no
use just replacing the lock on your front door, all your external doors
need to have their locks changed including the garage door, particularly
if there is connecting door that leads from your garage and into your
house.

Changing the locks may be a chore and means paying out just
when you thought you were done with the expense of moving home, but
think what it would cost you if a thief walked into your home using a
copied key and helped himself to your valued belongings.

You don’t
know how many copies of the keys the previous owner or owners, (homes
get bought and sold many times,) have had made. Where are those keys
now? Keys get lost, misplaced and stolen, sometimes they fall into the
wrong hands.

So, you now can see that changing locks to your new home is something
that you need to do right away, but are you going to replace all the
locks with the existing type?

Perhaps the previous owners of your home
were content with a lower level of security than you require for your
family, if so, now would be a good time to take the opportunity of
fitting higher quality, more secure, locks.

That’s it. The comparatively simple and inexpensive task of changing
all the external locks has eliminated the possibility of a thief
entering your new home using a copied key. That is until someone in your
family loses a key, has their set of keys stolen, or you loan a key to
someone.

Sooner or later it happens, you need urgent work
done in your home but the only time that you can get that work carried
out is when there is no possibility of someone being at home. So you run
the risk of loaning that key.

Think about fitting Keyless Locks,
then if you ever need to grant access to someone you give them a
unique temporary code and then when the repair job is done, or your
guest has left, you simply delete the code. No keys, no worries, they
cannot return later and enter your home.

With Fingerprint Locks you
don’t even give out a code. The fingerprint of the person that you want
to give temporary access to is scanned and retained in the system,
then when they no longer need to have access you simply delete their
print.

Enjoy your new home but remember that you do not want to
risk someone being out there with a copied key, so get those locks
changed.

Home Security Articles
>
Who Has a Copied Key?