The Burglar And The Training Shoes.

I heard tell of a guy who
returned home, from where it doesn’t matter but let’s assume it was from
his workplace, to find a well worn training shoe laying in the middle
of his drive.

After studying the unappealing item of footwear for a
moment or two, and wondering how on earth it got there, he did what you
or I would have done. He picked it up by the lace and deposited it in
the trash.

No doubt that not long after he was inside his home, with his
favorite beverage inside him, he had forgotten all about the decrepit
training shoe.

A few days later however he heard some news that
brought the shoe on the drive back to mind.

It seems that a few blocks
away another training shoe had been tossed in to the yard of an elderly
gentleman who was a bit of a recluse, almost a hermit in fact.

The
old fellow had spied the shoe out in his yard from his window, as it
was his custom not to leave his house even to tidy his yard, more
frequently than once a week or longer, he just let the footwear be.

Two
days later this recluse heard a rap, rap, rapping on his front door,
not one to encourage visitors he ignored the knocking. Next thing he
could hear the sound of someone breaking in.

Sensibly he quickly locked
himself in a back room and called the cops.

Full marks to the police department, they responded swiftly and caught the intruder red handed. 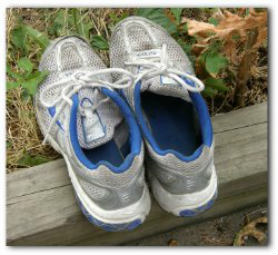 The subject of the training shoe in the yard came up. It seems that
it was this burglar’s method for testing out if folks were away on
vacation.

He’d find houses that appeared to be unoccupied, but he
wanted to be a little more sure. He’d toss something, a soda can, an
old paperback book or, if he had one an old training shoe into the yard.

This
bad actor would then return in a few days, and if the present was still
where he tossed it, he was then a little more confident the family were
away.

If the family were in residence then naturally they would not
leave the item laying around.

What our burglar friend did not count on
was a recluse who didn’t care about the state of his yard too much.

Was
the training shoe thrown on the drive of the first guy and the shoe
tossed into the recluse’s yard a matching pair? Who knows.

Of
course you already know to ask your neighbor to keep watch on your place
when you are away. So he will keep your home looking occupied and if he
sees some item of trash in your yard, he will dispose of it.

Security Articles
›
The Burglar And The Training Shoes.

High Security Padlock
If faced with a high security padlock that he doesn’t know how to overcome, the burglar has two options, find another way into your shed or give up and look for someplace else to burglarize.