What is an Opportunist Burglar?

He
prefers to break in to homes during the daytime when it is likely that
there is nobody at home, much less risk of a confrontation.

Best of all
he likes homes where a door or window has been left unlocked, or even
better, left open.

He
keeps an eye out for houses with overgrown gardens, or with many trees
and tall shrubs.

These type of gardens provide him with valuable cover
from the eyes of neighbors.

Houses that back on to a park, or open
land, are favorites with the opportunist burglar, so too are houses
with an open alley, or drive, at the side.

The opportunist may
take interest in houses that are ill kept and not as well maintained as
neighboring houses.

He will not take this as a sign that there is
nothing inside worth stealing but as an indication that the owner will be unlikely to have spent out on alarms and other security measures.

The opportunist burglar usually does not posses many housebreaking
skills, he prefers everything made easy for him.

He may be young, not very well educated, and live not too far from you.
The opportunist burglar is highly likely to have a drug habit, a habit
that drives him to burgle most every day.

He does not like to
break windows unless he is sure that there is nobody within hearing
distance.

He will look for windows that are unsecured or are secured
with a flimsy latch that he can easily slip. 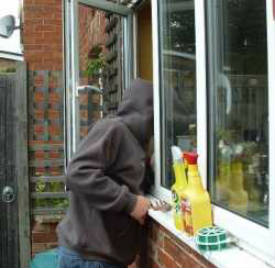 The opportunist will force doors that have flimsy locks, he usually
makes noise when doing this so again he prefers no one around, but best
of all he likes unlocked doors.

He loves ladders and tools left
laying around, he will take the opportunity to use these to break in to
your home or your neighbor’s home.

He also likes to see items of value through the window, this lets him know that it will be worth burglarizing your home.

He
looks out for houses with mail or newspapers have been left to pile up
or other signs that the family may be away on vacation.

He will ring your door chime with a ready
prepared story should someone answer. If nobody answers he will listen
for signs of occupancy and if he hears none he will look for the easy
way in.

He does not like Watch Dogs or beware of the dog signs, neither does he like Security Cameras, fake or real, or Security Decals.

He
does not like neighborhoods with an active neighborhood watch, he does
not like properly secured and well maintained properties. The
opportunistic burglar does not like Alarm Systems. These things may make him look for some other home to burgle.

He may not fit an exact profile.

Instead of working alone the
opportunist burglar may operate with an accomplice or two. Instead of
operating on foot, he may spend some time cruising around a
neighborhood selecting homes that appear to be easy targets.

Although
he commits most of his crimes during daylight hours, he may strike on
dark winter evenings before commuters return home from work.

He
does not like confrontation so does not plan on violence. However, if
unexpectedly disturbed during the course of his crimes he may panic and
use force.

He may burgle more than one house in a neighborhood, particularly if
they are built to the same plan. Successfully breaking in to one house
means that he knows the layout, so similar houses will cost him less
time and less risk.

The opportunist burglar will often return to a property he has burgled before, he
knows the property, knows the security and knows what he is likely to
find inside. He may wait it out a while giving the homeowner the time
to replace the things he stole before.

The Opportunistic Burglar is the Easiest to Defeat.

Statistically your home is more likely to be broken into by an opportunist than any other type of burglar. Thankfully opportunity theft is the easiest to guard against.

Because
the opportunistic burglar does not possess many housebreaking skills,
and likes to spend as little time as he can breaking in to a home, even
basic home security measures will likely cause him to give your home a
miss.

Always ensure that all doors and windows are locked when you
leave your home, even if it is just for a moment. Make sure that your External Doors are
robust, in good condition and are fitted with quality locks. If you
have an alarm system set it when you leave. Join your local neighborhood
watch.

Take the simple home security precautions outlined on this
page – don’t let your home be the easy target that the opportunist
burglar is looking for.

Distraction Burglary
These criminals often pretend to be persons in authority.
They may even be wearing a uniform, perhaps pretending to be from a
utility company, a medical service or even a police officer. . .