Glass Break Sensors Trigger Your Alarm System Before the Burglar Gets Inside Your Home.

Smash! Because of your good sense in fitting quality window locks, Mr. Burglar has no option but to break the glass if he wants to get into your home through your window.

Mr. Burglar has checked things out and he is pretty sure that your
neighbors are not at home and there is not much chance of anyone hearing
the tinkle of breaking glass.

Perhaps he waits until there is passing traffic to cover the sound a little.

As soon as Mr. Burglar smashes the glass your monitored security system receives a signal and the authorities are alerted.

At
the same time a siren sounds and spooks the intruder.

He doesn’t want
to hang around with that noise whether he thinks your neighbors are at
home or not.

The Development of Glass Break Detectors.

Perhaps you remember the foil strip break detectors. These foil
strips were fixed around the perimeter of the glass and looked on the
ugly side to say the least.

If the glass was broken so too were the thin foil strips and this sent a signal to the security system’s control panel.

Each pane of glass had to have its own detector, which made the job of protecting your windows both time consuming and expensive.

The next type of glass break detectors to appear on the market were a
bit of an improvement on the foil strips.

They were smaller and
slightly less noticeable and worked in a substantially different way. 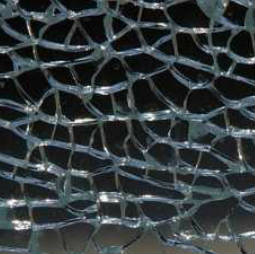 These
sensors worked by detecting the vibrations given out by breaking glass,
which was a heap better than relying on a strip of foil tearing.

Trouble was a whole lot of other things could set those sensors off, such as a passing truck or a slamming door.

Not only that but you still had to have one glass sensor for each pane.

Eventually
glass break detectors were developed that did not depend on detecting
the vibration of a breaking windowpane, but rather the actual sound of
breaking glass. These work well and produce far fewer false alarms.

However
some false alarms still occur because the sensor can occasionally
confuse the sound of two drinking glasses clinking together, or a
similar sound, with the tinkling of breaking glass.

Glass breaking
detectors that trigger only with the sound of breaking glass are known
as Single Technology sensors.

For a burglar to break your
window he has to hit it and so there will be vibration caused by the
thud, and the actual sound of the glass breaking. Both have to be detected for a Dual Technology glass breaking alarm sensor to activate.

This
belt and braces technology prevents false alarms through the sensor
mistaking some other tinkling sound with breaking glass.

But
the biggest advantage that acoustic glass breaking sensors, whether
single or dual technology, have over older style sensors is that usually
you only need one sensor per room and not one for each window pane.

Acoustic glass breaking sensors are not affixed to the window
itself but on walls or ceilings. They cannot listen through a wall or
around a corner but cover an area of 25 to 35 feet, at 360° range, so
for most rooms just one sensor provides full protection.

With the older glass break alarms you needed one sensor per pane, so
the ability to use just one acoustic sensor unit per room can give you a
real saving, even though each unit cost $50 to $150. They are available
for both hardwired and wireless home security systems.

Whereas motion sensors
detect an intruder moving around inside your home, glass break sensors
trigger your alarm system before the burglar gets inside. You may be
left with a broken window but that is a heck of a lot better than
suffering a burglary.

Window alarms are a very important link in the chain of your home
security. Make sure that all windows in your home are alarmed and
protected from the burglar.